Ready to enhance the life of your furry friend? Click for Services.

7 Lessons I Have Learned as a Dog Walker 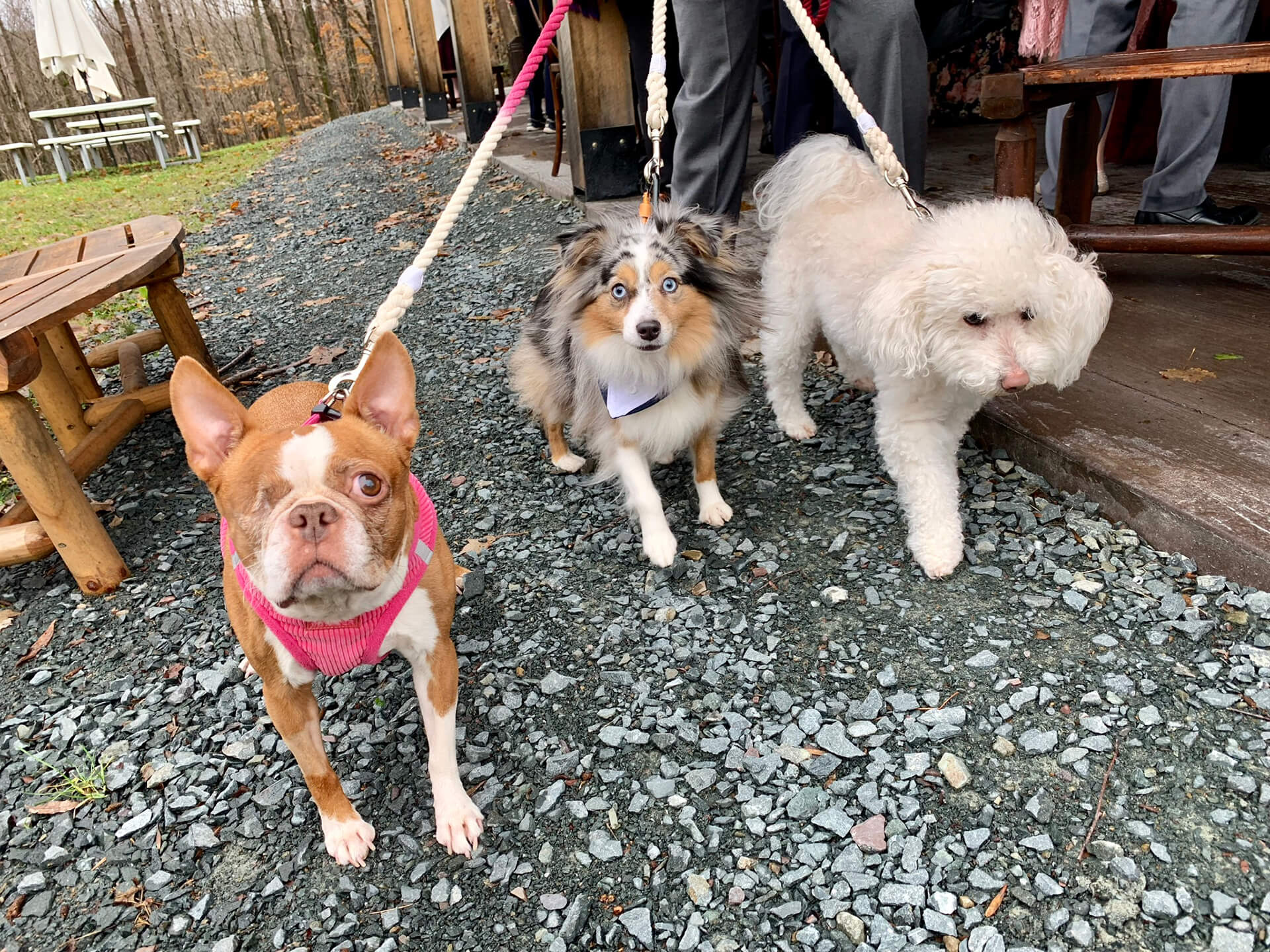 When I became a dog walker two years ago, I had no idea I was starting my career. I thought I had found the perfect part-time gig to help me through graduate school. Having an excuse to get outside, get some exercise and animal therapy all at the same time filled a lot of needs for me. Little did I know that one year later I would be leaving graduate school to explore the dog career world (and it is much bigger than you would think). Caring for other people’s pets has taught me many valuable lessons about myself, how I live my life and how I interact with others and the world around me. I’d like to share 7 of those lessons with you:

Number One: Be Prepared!

Every dog is different. Every walk is different. Every rainy, snowy, hot and muggy day is different. My experiences as a dog walker have taught me to be flexible in situations where I would have otherwise been uptight. Some helpful tips based on those experiences include always having an umbrella and an extra pair of socks on hand, be ready for accidents because they do happen, leave some wiggle room for extra TLC if needed, and always have treats.

Each preparedness tip I have comes from learning the hard way- getting soaked on walks, rushing to clean up a mess, sloshing around with one wet sock and one dry sock after stepping in a puddle, a pup getting zoomies after a walk that they have to express, a dog stealing my glove at the dog park, a loose dog approaching my pack and being unsure if they are friendly). Because of these experiences, however, I find myself not only accepting every weather/doggy challenge that comes my way, but also being ready for these challenges! Being prepared only makes life easier for myself and for the dogs I am walking.

Every once in a while, you will find yourself standing on the side of the road trying to convince a 70 pound lab why he should continue walking when it is 98 degrees out and he is sprawled out on the grass enjoying the shade. Even if your argument is convincing to your human brain, to that lab nothing but a steak is going to coax him into standing up. You know that his home is right around the corner, and if he would just walk another four minutes he would be back in the AC with a cold Kong and a bowl of water. But all that pup knows is it is too darn hot, and this is as far as he’s going. This is where lesson number two comes in handy: Be. Patient.

Sometimes you will also find yourself staring in awe at a small hound that just walked for thirty minutes and didn’t get dirty at all, but is now rolling in a mud puddle ten feet from their house and you have to get moving. Be patient! And how about that six month old puppy that has discovered what a fun tug-of-war toy their leash can be? Or the rambunctious shepherd that you are pet sitting who steals your shoe and is running laps around the dining table with it? Or what about having to wrestle with my own puppy every time he finds an empty ketchup packet on the ground on walks? The answer is always to be patient.

As cliche as it is, dogs will be dogs, and that is just the truth. They live in the moment, and they act in the moment. They throw logic to the wind at times, they aren’t worried about being clean or punctual. They just want to have fun! At some point in my journey, I have stopped trying to convince a stubborn dog, but rather sit with him, pet his ears, and tell him we will move when he’s ready. I have stopped myself from saying, “get away from that puddle!”, and instead grabbed a towel and started drying. Instead of telling the puppy not to chew on his leash, I show him that he gets to play tug with his own toys once we get home. Instead of chasing a dog around the dining table, I grab some treats and teach her “drop it”. And as for my own garbage munching puppy, “leave it” is his new work in progress.

There is a time and a place to get frustrated, but take that frustration and turn it into a learning experience for yourself and the pup you are working with, and you will find that you bond much easier this way. Whether they realize it or not, dogs appreciate our ability to be patient, and we should appreciate their ability to be themselves. 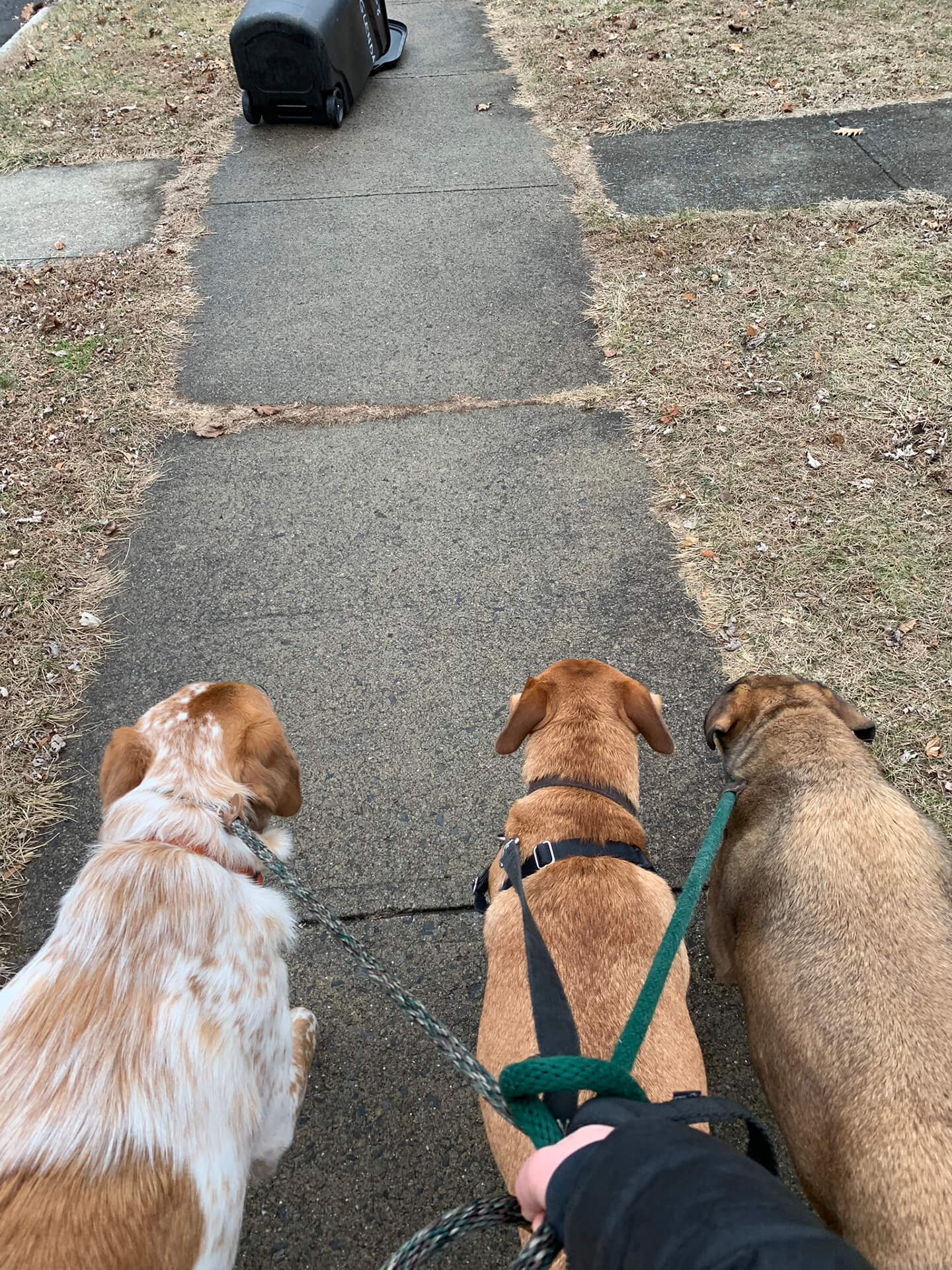 I do NOT mean let go of the leash! Definitely do not do that.

I learned that it is all about changing my perspective, because I certainly can’t change the weather or the time. Remember: it could always be raining harder, the wind could be blowing stronger, the snow could be coming down faster, the heat could always be worse! The weather isn’t as bad as you think it is when you look down and see a pup rolling in the snow or basking in the sun. Thirty minutes is not going to go faster because you are cold/hot, but it will go faster if you just try to enjoy it!

Allowing myself to feed off of dogs’ positivity has in turn made me a much happier person because it has shown me the importance of letting go of control. I have learned that the only time it is appropriate to try to control my dog or someone else’s is if they are in danger. Otherwise, remember that in their doggy mind, the world is a big, exciting place, with new things to explore all over. I no longer try to control the pace of our walk, which direction we are headed, which dog walks on which side of me etc.. If Fido wants to turn down a different street than usual, sniff a spot on the left as opposed to on the right, or if he has more energy one day and wants to speed things up, fine! As long as the dogs are safe and having healthy, constructive fun, then so be it! What more can you ask of our furry friends? Instead of trying to control a dog, I have learned to teach them when and where certain things are or or not appropriate, which gives them the tools to be a safe and happy pup!

Imagine how frustrating and confusing life would be if we could not express ourselves with words or hand signals. How would we tell someone we have to use the bathroom? How would we show where a pain is coming from? How do we let someone know they forgot to feed us this morning? It is so important to listen to the unspoken signals our dogs give us that tell us what they need or what is wrong. This strengthens the relationship between you and a dog immensely when they know you will at least try to figure out what they are saying.

If a dog is pulling when he does not usually pull, try to listen to what he is telling you. I have taught our puppy not to pull on walks, so he now walks with a loose leash by my side. If he suddenly pulls toward the grass, he is likely saying, “Stop here, I have to go” (although sometimes he’s actually saying, “ooo look, a chicken wing bone!”). If I were to pull back and not allow him access to the grass, what is he supposed to do now? And how is he going to tell me? And hey, if I’m wrong and a    dog is just pulling for the sake of excitement, talk to him, work with him. Try your best to be understanding and cooperative with your pups, and if they could say thank you for all you do for them I promise that they would!

This also goes for the tools we use for our dogs (different leashes, brushes, baths, treats, bowls). I had a client that asked me to figure out why his dog takes each piece of food from her bowl and bring it to the rug to eat. A few different trainers tried different methods, including withholding her food until she agreed to eat from her bowl only (ugh). Long story short, it turned out that her metal ID tags would hit her metal food bowl, making a loud noise in her ears. Removing her collar while she ate ended up being the solution! If only she could have said, “Hey, can you take this collar off for me while I eat? I hate having to move my food to another spot just for one bite. Thanks!”. I also used to work at a grooming salon, and a woman complained that her short haired dog does not sit still during brushing sessions. We realized she was using a metal wire brush meant for long coated dogs, essentially scraping her dogs skin raw due to using the wrong tool. Who would sit still for that? Listen to what they are telling you! Sometimes their behaviors are curable just by doing so. 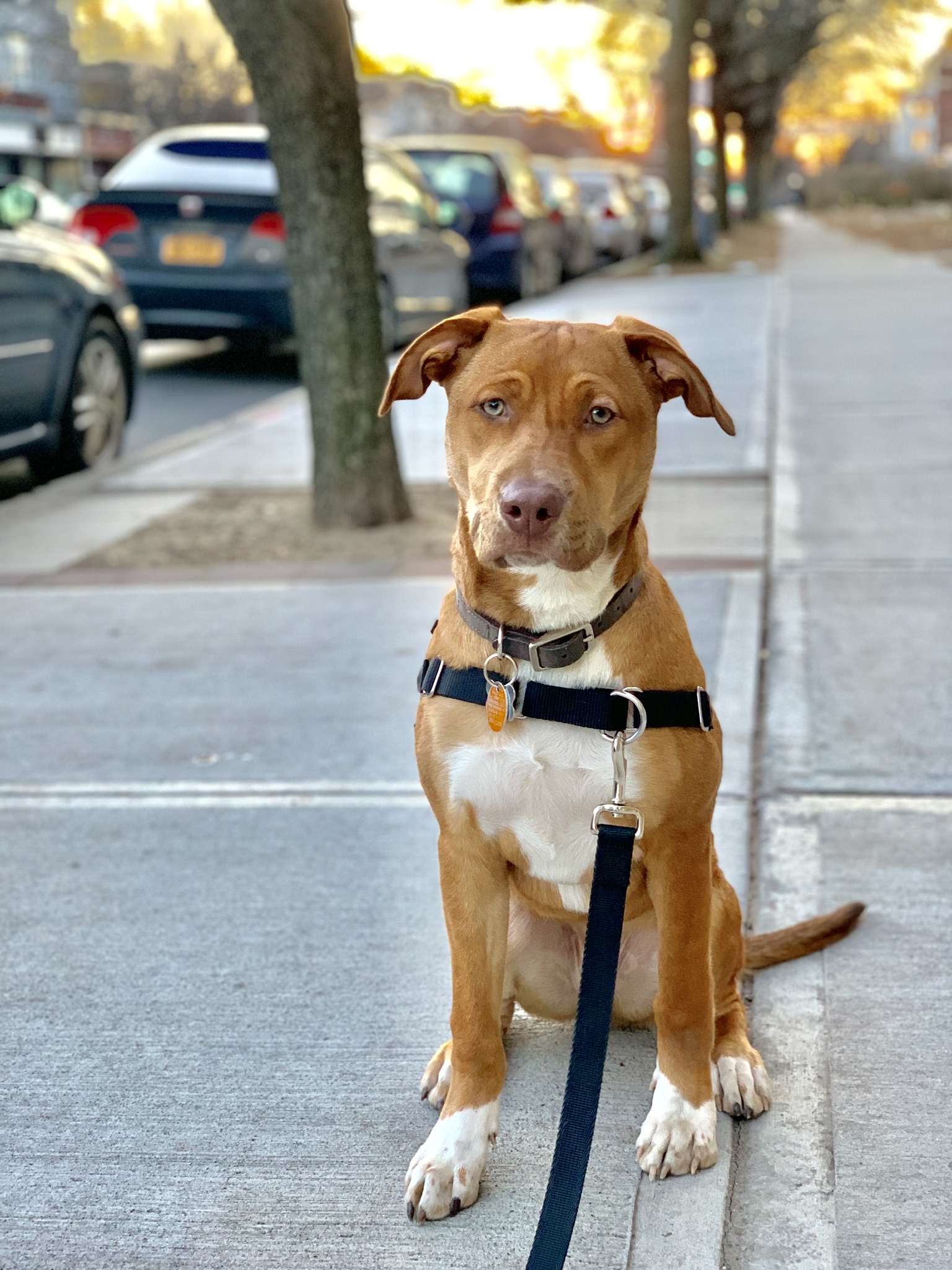 This one is short and sweet: keep your eyes ahead of theirs, try to see a distraction/garbage/another dog/squirrel before they do. Doing so helps prevent mishaps (tangled leashes, sudden pulling, eating a foreign object off the ground, rolling in smelly things). It’s impossible to always think steps ahead of them, but if you can be at least think one step ahead you can save yourself a lot of trouble!

If the dog is having fun, you should be too because it means you are doing something right. Walks are their time to be dogs, to fall into a groove and get some good exercise, to see what’s happening in the world and to explore. I’m not saying someone has to be perfect, or always on point, or always positive and at your best just to take their dog for a walk. Just have fun, and the rest follows easily.

So, those are the 7 of the things I have learned during my time as a dog walker thus far, and I look forward to the next 7 things I will pick up along the way. Something as simple as walking a dog has taught me so many invaluable lessons. I am so grateful for the changes your pets have brought to my life and the way I live it. I am much happier, more present and relaxed, and most importantly I love what I do. So go walk your pup, and you may find that these changes can happen for you too!

Sweet Lulu is headed to FL for the winter, and while I’m sad to see her and her awesome parents go, I am really excited for their next chapter ...

Stay warm and busy with your pup this winter, learn some fun tricks to show off to your family over the holidays and gain a better understanding of ...

Gracie is growing up so fast. You can tell exactly what she is thinking from watching her radars… I mean ears!😍🐾
.
.
#dog #dogs ...

Somehow it has already been 4 years since I started this business! I have made so many new relationships this year, took a big leap of faith that has ...

Basil is working on fine tuning some of his behavioral skills since he already has the whole being cute part down!
.
.
#dog #dogs ...